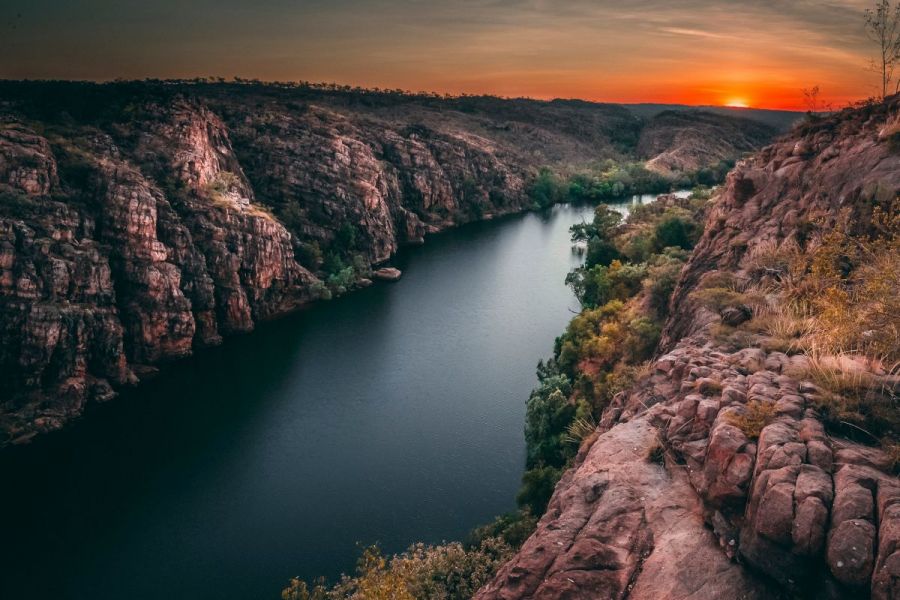 Katherine is often called the ‘Crossroads of the North’ as it is located on the junction of the Stuart Highway linking with the north and the south and the Victoria Highway to Western Australia.

The town of Katherine is the fourth largest in the Northern Territory, situated 320kim south-east of Darwin on the beautiful Katherine River. The community has a population of approximately 6,300 people (2016 census).

Katherine has a sub-tropical climate and there are two seasons, the wet and the dry. From April to October, Katherine enjoys the dry season, which means hot days and cool nights with hardly any rain.

For the rest of the year (November to March), is the intense wet season, with steamy hot days relieved by thunderous storms in the evening – the water filling the local rivers and waterholes.

Katherine is about a three-hour drive south-east of Darwin on the Stuart Highway. Katherine has an airport which caters for light aircraft and smaller commercial airline. One of the main air companies is Airnorth.

The Katherine Hospital is a non-specialist public hospital that services Katherine and the surrounding region and remote areas. It has 60 beds and the emergency department is open 2 hours. The hospital features a maternity ward, antenatal clinic, general medical and surgical wards along with a children’s ward, radiology and pathology departments and more.

Katherine features the Oasis Shopping Centre which has Woolworths and specialty shops. There is also a Target and Kmart – (K-hub) which has limited stock but can order in specialty items from other stores.

There’s no denying that Katherine’s foodie scene is abundant and healthy! There are a plenty of cafes,
take-aways, restaurants and other eating places in the area, ranging from boutique cafes housed in old-fashioned caravans to five-star dining restaurants for the fine-dining experience.

Vast and diverse, the Katherine region is where the outback meets the tropics, adventure meets relaxation, and the outdoors meets ancient culture.

There are plenty of thrills, spills and leisure time to be had in Katherine. The Katherine region extends from the Gulf of Carpentaria near the Queensland border towards the Kimberley in the west.

See the mighty Katherine River flowing through Katherine Gorge (Nitmuluk National Park), or head our for camping and adventure in the Elsey and Gregory National Parks. The Daly River and Gulf Region are renowned as top fishing destinations, and Mataranka is rich in history – the Never Never Museum tells of local Mangarayi and Yangman people and customs, and the more recent settlement of Europeans.

Take part in one of the area’s colourful and quirky festivals and events. You can also explore the limestone Cutta Cutta Caves, or relax in the Katherine Hot Springs (a mere 5 minutes from town).

The Katherine Town Council operates 2 large sport and recreation facilities, the Katherine Sportsgrounds and Aquatic Centre and the Katherine Showgrounds Complex that are the focus area for a wide variety of sport activities all year round.

Katherine’s sports grounds are the playing fields for many sporting groups in the community, including rugby, athletics, BMX, soccer, baseball, tennis, basketball and netball.

Katherine School of the Air

The school caters for isolated primary and middle school students who reside in the top half of the Northern Territory. The school also caters to urban students that require alternative pathways.