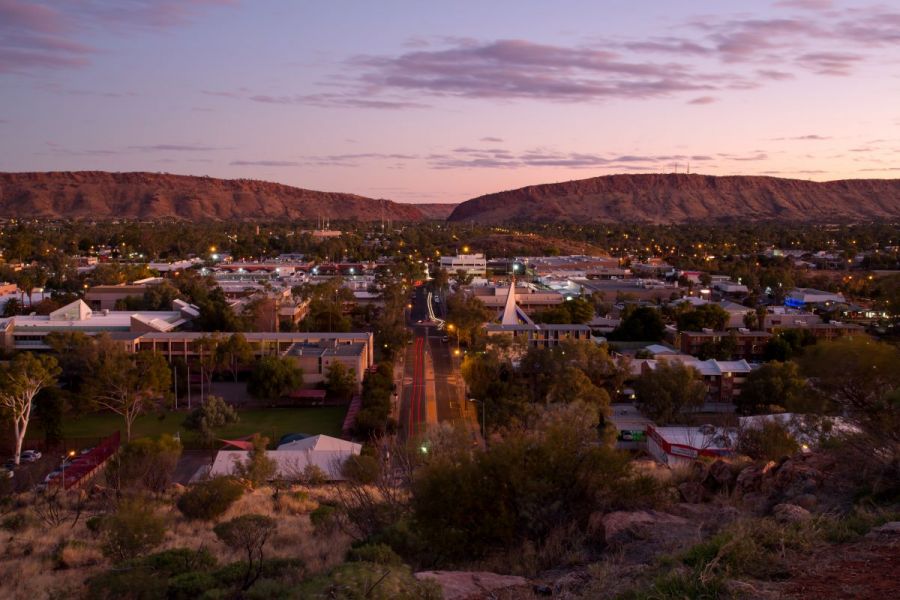 Alice Springs is the third largest town in the Northern Territory. Up until 1933 it was known as Stuart. However the Arrente people who have inhabited the area for thousands of years, often refer to the area as Mparntwe.

Alice Springs is approx. 1500km from the Northern Territory’s capital Darwin, and roughly the same again from Adelaide.
The weather in Alice Springs is one of extremes.  During winter temperatures can drop below 0C. In summer temperatures can reach as high as 40C.  Rain fall is sporadic and unpredictable but a year by year average is around 230mm.

As of 2018, Alice Springs had a declining population. Currently the population sits around 26,000, representing approx. 10% of the Northern Territory’s population. A census in 2016 indicated that around 2000 of the inhabitants were indigenous, however that number is likely to be much higher.

There is always the option of driving to or leaving Alice Springs. The Stuart Highway is a modern double lane carriageway. The distances between stops is measured in hundreds of kilometres. Fortunately there is also a modern airport that is serviced by all the major national carriers.

Alice Springs is serviced by a modern 180 bed hospital that includes an emergency department. Most specialist services are offered from within this facility. St John Ambulance operates in support of the hospital.

As a major centre Alice Springs has a lot of shops, the bulk of which are found in the CBD. The 2 main shopping centres are the Todd Mall, and the Yeperenye Shopping Centre.  Within these centres you’ll find the usual specialist shops you’d expect anywhere else, including Woolworths, Coles and Foodland.

Alice Springs is known for its cafes and restaurants. There are the well-known names like Gloria Jeans, but also many places offering more of a boutique experience.  Dining is even better. There are the usual chain stores like MacDonald’s and Kentucky Fried Chicken, but plenty of local stores offering something more up market if that is your thing.

The landscape around Alice Springs is unique.  Arid landscapes and vast rock formations combine to create some of the most awe inspiring locations in the world.

Of course there is Uluru, an internationally recognised wonder, but there are far less known about but equally stunning sites to visit. Wonder at the juxtaposition of miles of flat dry sand, with palm tree lined ancient rock pool oases.
Alice Springs is one of the hot air balloon capitals of the world.  Perfect conditions, including warm air and wide open expanses attract balloonist from all over the world.  There all also plenty of local companies offering the same experience to tourist and locals.

If culture is your thing, Alice Springs has 50,000 years of indigenous culture to share with you. There are innumerable opportunities to immerse yourself in the story of the oldest surviving culture in the world. Attend a corroboree, browse traditional paintings (or try your yourself), or take a guided tour of a “significant” site.

Without a doubt, for a town its size, Alice Springs punches above its weight when it comes to sport. This applies to both the level of, and diversity of, what is available.

Any type of sports you find anywhere else in Australia you are likely to find here, and a few new ones as well, including mountain bike riding, hand gliding and darts. Baseball in particular is very popular, due partly to the presence of Americans at nearby Pine Gap.