History of the NT Police Force 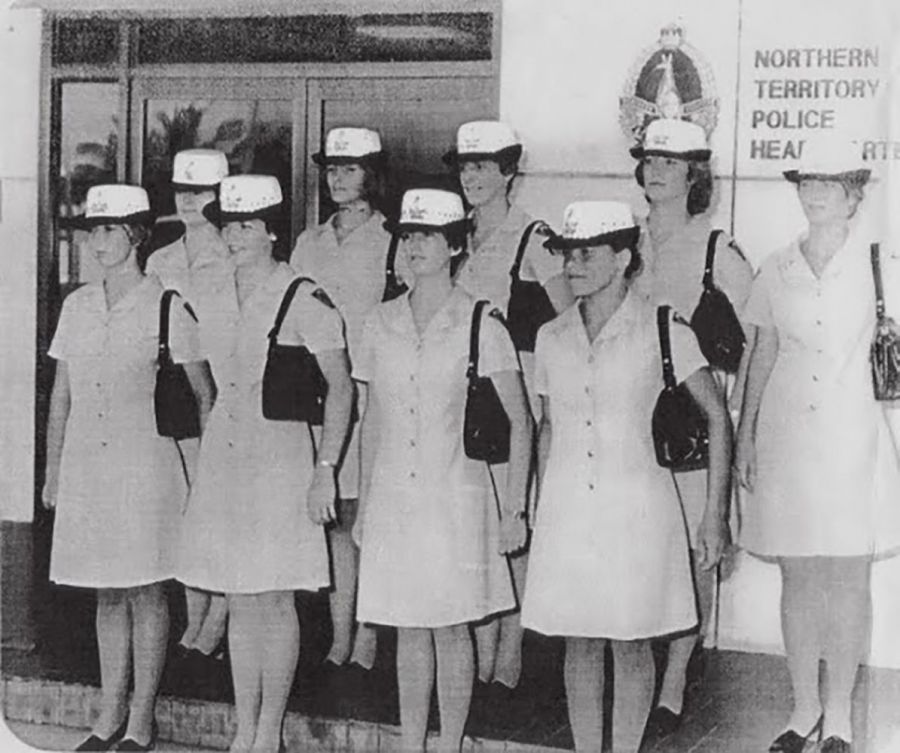 The Northern Territory sometimes referred to as ‘the last frontier’ has a (permanent) police history dating from 1870 when Inspector Paul Foelsche and six other police officers arrived in the Territory. A small rural constabulary (part-time force) had existed earlier but was disbanded.

Back then, the Territory was under South Australian control and the town of Palmerston, now the city of Darwin, was founded by William George Goyder – Surveyor General of South Australia.

In December 1869, the Governor commissioned Paul Foelsche, a Corporal in the SA Mounted Police stationed at Strathalbyn, to be the first Sub-Inspector of Police at Palmerston. He sailed for Darwin soon afterwards.

The police uniform then worn in the Territory was the same as that worn in South Australia. It consisted of a short cut-away blue serge tunic with nine regulation buttons, silver twisted cord shoulder knots, black braid on the sleeves and silver chevrons for non-commissioned officers. The riding breeches were dark blue corkscrew serge with a white stripe. Ideal tropical wear!

Like their predecessors, the Rural Constabulary at Escape Cliffs, the first detachment of police at Palmerston had as their primary responsibility the maintenance of law and order in the community. Known as ‘The Camp’, the main settlement area was on the harbour waterfront, near what is today Stokes Hill Wharf.

With the discovery of gold near Pine Creek in 1872 the police found themselves with never a dull moment. Stations were established at Adelaide River, Yam Creek, Pine Creek, Roper River and later at Daly River.

The first police fatality occurred in 1872 when Mounted Constable Davis, a noted swimmer, disobeyed a local Standing Order and had a dip in the sea - He was taken by a crocodile.

Darwin’s first police station was a crude affair of poles and plaster measuring 20ft by 12ft. The inspector lived nearby in three rooms. A small stone building with two cells was the accommodation for those in custody. These are now incorporated in the Administrator’s offices on the Esplanade.

Then the police had the invaluable assistance of Aboriginal Trackers.

In Central Australia, the police were part of the South Australian Mounted Police. Mounted Constable Shirley was the first mounted trooper in charge at Alice Springs (first called Stuart).

On 1 July 1964, Clive William Graham, a police officer of long standing in the Territory, was appointed as Commissioner and the force as a whole was administered as part of the Public Service of the Northern Territory.

In recent years, various cases have made national and international headlines:

Since 1955 when 80 police officers were employed, the size of the Northern Territory Police Force has grown significantly in line with the population.  Today the establishment is more than 1200 sworn Police, Auxiliaries and Aboriginal Community Police Officers.

In April 1961 five women were sworn into the Northern Territory Police Force.  This was the first time women were permitted to become NT Police officers.  The five women paved the way for many other women who have also contributed significantly to the policing profession since that time.  At that time their duties were limited, but by 1978 women were being employed with an equal opportunity to male officers. The landscape of policing has changed significantly over the years, and it is due to the considerable efforts of women and men within NT Police since 1961.

The Joint Emergency Services Communications Centre (JESCC) in Darwin has instant contact with all stations, vehicles, aircraft and vessels across the Territory and provides for the Police, Fire, Emergency Services and St John Ambulance Service.

Communications have improved over recent years with all stations now having internet access providing them with the most up-to-date information.

The Northern Territory Police Force has developed into a modern and respected force. It is equipped to meet the needs of the community, and members are trained to keep ahead of today’s criminals and their methods.

The motto of the Northern Territory Police Force is “To Serve and Protect”.