History of the NT Emergency Service 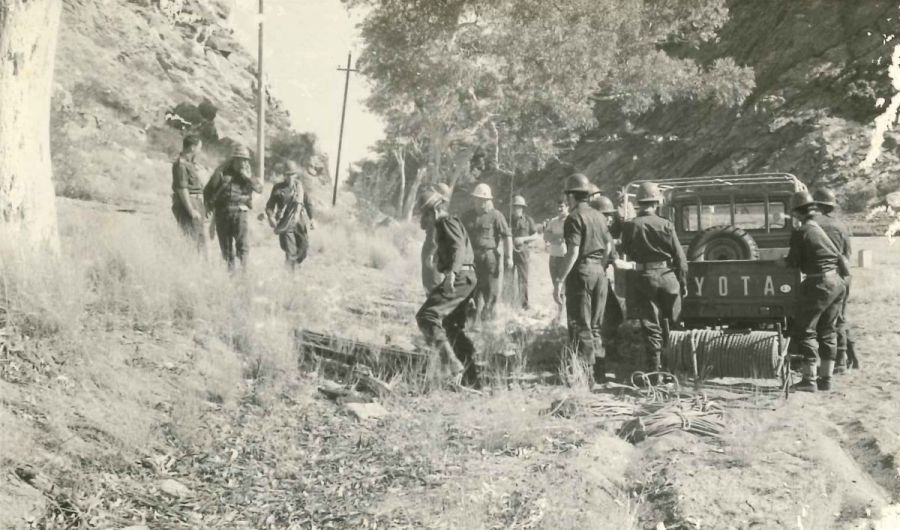 In common with its sister services throughout Australia, the Northern Territory Emergency Service (NTES) was born out of the need to create a civil defence capability during the Second World War.

On 28 June 1940, the Administrator of the Northern Territory, Mr C. L. A. Abbott appointed Mr A. R. Miller to be the first "part-time" Chief Air Raid Protection (ARP) Warden for Darwin, a post which he held until replaced by the first full-time ARP Warden, Mr E. T. Harrison on 19 May 1941.

Following the end of the war, the organisation was effectively disbanded until its resurrection in 1962 under the Controller of the Northern Territory Fire Brigade and Civil Defence, Mr Reg McCafferty.  In 1965 its' title was changed to Northern Territory Civil Defence and Emergency Services under the Controller Mr R. H. Webber who was to become affectionately known as "Disaster Dick".

From 1965-67, the organisation became established at its' administrative headquarters (the old Parap Police Station) on the corner of Parap Road and the Stuart Highway.  An operational base (civil defence bunker) was constructed at the old municipal incinerator site in Bishop/Jolly Streets, Darwin at the cost of 27,000 pounds ($54,000AU).

With the creation of the Commonwealth Natural Disasters Organisation in June 1974, the responsibility for civil defence and emergency service was devolved to the States and Territories.  In the transition, the official birth date of the NTES was set for 1 January 1975 with Mr L. Wilson appointed to be the Executive Officer.

The intervention of Severe Tropical Cyclone Tracy on 25 December 1974 gave the new service a baptism of fire which had a significant bearing on the subsequent development of both the NTES and the broader counter disaster organisation throughout the Northern Territory.

On his departure from Darwin on New Year's Day 1975, Major General Alan Stretton, the Director General of the Natural Disasters Organisation, advocated the provision of strong emergency powers to enable active control and direction of the emergency operations necessary to rehabilitate Darwin from its devastated state.

Following Self Government for the Northern Territory in 1978, a Southern Divisional Headquarters at Alice Springs was opened in February 1979.

In 1981, a tripartite organisation was formed with the amalgamation of the Northern Territory Police, Fire and Emergency Services (NTPFES) headed by the Commissioner of Police as Chief Executive Officer under the Chief Minister and Minister for Police, the Honorable Marshall Perron MLA.

In 1986, the positions of Director of Northern Territory Fire and Rescue Service (NTFRS) and Director of NTES were amalgamated and Mr Beer was appointed Director.  Notably, the independent operation of both services within the NTPFES continued.  In 1987, the Training Branch of the service relocated from the temporary Territory Headquarters to the newly constructed Police, Fire and Emergency Service Training College within the Berrimah Police Complex - now known as the Peter McAulay Centre.

Mr Beer departed from the Northern Territory in 1988, and separate Directorships for the NTFRS and the NTES were reinstated with Mr R. Charrington becoming Director of the NTES.

Following a review of NTES conducted by KPMG, permanent staff were reduced with NTES counter disaster reserve stores and equipment holdings were integrated into the departmental Supply Section.

In 1994, Mr Iain Rae was appointed Director of Fire and Emergency Services when the positions of Director of each service were once again amalgamated with Mr Jim Hocking as Director, Operations.  With the departure of Mr. Hocking in 1995, Commander Mick Lucas was seconded to NTES until 1997, he, in turn, was replace by Mr. M. Bowman on 9 July 1997 who became Assistant Director NTES.

In July 2006, Mr Peter Davies was appointed as Assistant Director.  On 1 September 2007 separate Directorship for the NTFRS and NTES was reinstated with Mr Peter Davies becoming Director of NTES until late 2012. Over the next ten years, the service undergoes several changes with various Directors including Tom Konieczny and Andrew Warton.

During his time Director, Andrew Warton began the process of introducing State Emergency Services branding and services into the NTES Volunteers to become more recognisable to interstate tourists in need. Which also provided an opportunity to share resources across the states significantly.

As of November 2018, Mr David Willing was appointed as the new NTFRES Executive Director.