Only one award can be made to an individual. Recipients are entitled to the post-nominal APM.

The National Police Service Medal (NPSM) recognises the unique role of members when serving and protecting the community, as well as a member’s past and future commitment to give ethical and diligent service.
The awarding of the NPSM is subject to the conditions specified in the National Police Service Medal Regulations 2010 (Cth) and the Amendment to the Regulations 2013.
A period of 15 years qualifying meritorious service or several periods of qualifying meritorious service that, in aggregate, amount to 15 years is required for eligibility for this medal.  Members are to have been serving on or after 14 February 1975 to be eligible.

No clasps are available for the NPSM 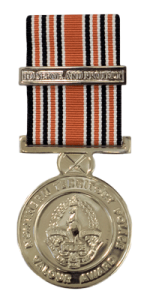 The NT Police Valour Medal is awarded by the Commissioner of Police to a member for displaying exceptional bravery in extremely perilous circumstances or who acts courageously and responsibly in the face of potential or actual danger to their life and will take the form of a framed certificate and an ornamental medal and bar to be worn as an unofficial honour. This award may be made posthumously and may be awarded to a member who has left the Police Force.

In the event that an officer, who has previously been granted the Valour Award, performs an act of exceptional bravery in hazardous circumstances, that officer will be awarded a silver bar to the Valour Award.

The  Commissioner’s Policing Excellence Medal recognises excellence in policing by individuals or an identified group in the pursuit of the NTPF core business outcomes and encompassing corporate values.

Commissioner's Commendation Ribbon and Group Citation may be awarded to any member or group who displays exemplary service and/or dedication to duty far exceeding that which may be reasonably expected. 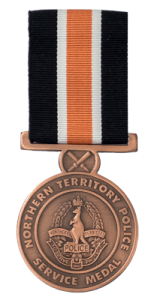 A bar may be awarded after each further ten year period of service.

The Remote Service Ribbon was developed to recognise and promote the past and future of remote policing within the NT.

Remote policing areas in the past could be described as being harsh, under resourced and demanding not only on the serving member, but on their families which endure the same conditions. Historically remote policing was conducted on horseback with one man stations covering a large district. A large part of the core business of policing in the Northern Territory has always been our remote service to our indigenous communities and maintaining real relationships with these remote regions.

This Ribbon recognises and rewards all members being Police, Auxiliary and Aboriginal Community Police Officers for their service to remote policing.

The Aboriginal Community Police Officer (ACPO) Administrator’s Medal recognises the achievements of an ACPO who has undertaken their duties with diligence and dedication and who has made a significant contribution to community policing.

Auxiliary of the Year Award

The purpose of this award is to recognise an individual Police Auxiliary who has undertaken his/her duties with diligence and dedication.

The award is to recognise the member’s contribution within the workplace, taking into account that they have contributed to the effective and efficient delivery of police services to the community or have enhanced the standing of the Northern Territory Police Force within the community.