History of the NT Fire and Rescue Service 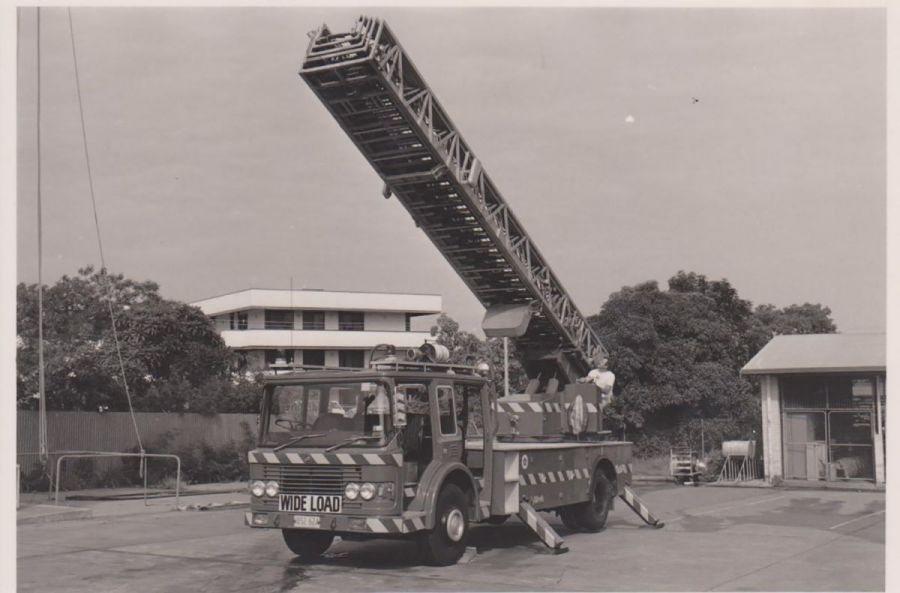 The Northern Territory Fire and Rescue Service, unlike many of the Fire Services interstate, is relatively young. During the formative years of Palmerston, now Darwin, there was no formal fire protection provided. It appears the residents had to fend for themselves with a ‘bucket brigade’.

There were fires in Darwin, many of which, according to press reports, were quite severe. One of the more notable fires, which occurred in Darwin before a Fire Service was established, was the destruction of the workmen’s quarters at the Vestey’s Meatworks (at the site of the now Darwin High School) in July 1923. This fire caused damage estimated at the time to be in the order of £40 000. Contemporary newspaper reports refer to ‘strenuous efforts of the firemen’ in containing the fire at Vesteys but precisely who these firemen were remains a mystery. It is likely they were volunteers among staff at the meatworks.

By 1926 there was mounting concern in Darwin about the lack of fire protection for the buildings in the town, many of which contained much flammable material. In order to provide some fire protection, the administration acquired a ‘chemical fire engine’, which was issued to the police. The ‘chemical fire engine’ was a cylinder, mounted on a handcart, which contained 30 gallons of water. The cylinder connected to small bore tubing through which water was directed at a fire. Bicarbonate of soda and sulphuric acid stored in bottles inside the cylinder mixed after a plunger broke the acid bottle after the cart arrived at a fire. The resultant gas drove the water through the tubing at high pressure. This remained Darwin’s only fire protection for the next 15 years.

In July, 1940, with the threat of war facing Australia, an Air Raid Precautions Unit (ARP) was formed in Darwin. After its formation the ARP acquired equipment from a variety of sources. This included a ‘decrepit handcart fire extinguisher’ from the police. This was the 1926 ‘chemical fire engine’ which was, it seems, still in service in 1940.

In June 1941, with the imminent completion of the mains water supply, senior officers of the military forces stationed in Darwin lobbied Federal Cabinet for the establishment of a fire service in the town. A dispute arose over the cost of such a service, the Army and Airforce attempting to fund separate services of their own, in addition to the creation of a civil fire service. Eventually, Cabinet approved the formation of a single, civil Brigade.

Despite the situation in Darwin during 1941, with war preparations being undertaken, the Federal Government delayed making a decision whilst they sought advice from an expert regarding Darwin’s need for a fire service. The Queensland Premier nominated a senior officer to examine the situation in Darwin and determine the staffing levels and equipment necessary to provide full-time fire protection.

Chief Officer George McCreath Garven of the Townsville Fire Brigade, with the support of the Queensland Premier, undertook the review. He recommended the establishment of a fire brigade in Darwin, with the fire station being located near the intersection of Knuckey and Mitchell Streets. Garven recommended two fire appliances be stationed in Darwin with a staff of two permanent officers and eight ‘partially paid' firefighters.

Commenting on Garven’s recommendations, the Technical Adviser to the Commonwealth noted, amongst other matters, ‘an alarm system such as a large bell will be necessary to summon the Brigade to calls of fires, etc.’. The Technical Adviser did, however, give his support to the formation of a Darwin Fire Brigade.

Because there was nobody in Darwin sufficiently experienced to command the new service the New South Wales Fire Brigade’s Board offered to provide an officer to establish the Darwin Brigade and train local people. A fire appliance, purchased from New South Wales, was shipped to Darwin by sea.

Sub-Station Officer Pye was selected by the New South Wales Fire Brigades Board to establish the Darwin Fire Brigade. He flew to Darwin in order to be there when the fire appliance arrived.

The Chief Fire Officer of New South Wales and staff at the Department of the Interior agreed that the Chief Fire Officer’s position should not be filled on a permanent basis because the officer concerned might ‘stagnate’. Instead, it was decided that officers of the Canberra Fire Brigade fill the position on a three-year rotational basis. The person selected as the first permanent Chief Officer of the Darwin Brigade was E.G. Bailey, then of Canberra.

The fire appliance loaned from New South Wales arrived just before Pye. On his arrival, Pye found the premises selected by Garven unsuitable for use as a fire station and instead located the fire station in premises rented from Cashmans at the corner of Cavenagh and Daly Streets. He then set out to recruit part-time members. He found the task difficult, lamenting:

‘… a large majority of the town are a floating population … (and) the men in the Public Service and Stores are working a good deal of overtime, and are the least interested.’

The second appliance left Sydney aboard a ship in early February 1942. It was too late. On 19 February 1942, the Japanese launched the first of many air raids against Darwin.

In April 1942, the military authorities assumed responsibility for firefighting, commandeering the civilian firefighting appliances. The ‘partly paid’ firemen were, according to one report, ‘absorbed into the forces’. Bailey and O’Brien returned to Canberra and New South Wales respectively after the general evacuation of civilians from the town of Darwin.

It was to be March 1946 before the issue of a civilian fire service became a topic for discussion. Chief Officer Bailey returned to assume command of the Brigade in Darwin with Firefighter Chaffey as his deputy. A small Fire Brigade commenced operations in Alice Springs in 1949 after a major fire in that town demonstrated the need for a fire service there.

Compiled after research in the Australian Archives (ACT and NT Regions), contemporary newspapers and several books. Full copies of the references are available from the author.

Bill Wilson is a former Assistant Commissioner of the NT Police who researched the history of the NT Fire and Rescue Service.

This section recognises those members of Northern Territory Fire and Rescue Service who have passed away in the line of duty and those who have died whilst still serving. Their contribution to the service and to the Northern Territory community will always be remembered.

Members who have passed away whilst still serving: