A woman who was found in possession of more than 200litres of alcohol will appear before the Alice Springs Local Court charged with secondary supply of alcohol.

The 36-year-old woman had recently returned from South Australia in possession of a large quantity of alcohol, being 70 casks of wine and four bottles of liquor.

The woman was observed selling alcohol from her home in Larapinta on two separate occasion yesterday by members of Operation Saturitas.

A search conducted of the woman’s home was carried out earlier today where police are alleged to have located and seized 54 casks of wine and three bottles of liquor.

The woman was issued with a Notice to Appear for two counts of Unauthorised Sale of Liquor and will appear before court at a later date.

Superintendent Antony Deutrom said the seizure of the alcohol would contribute significantly to the amount of alcohol related incidents in Alice Springs.

“This is a considerable amount of alcohol to be removed from backyard sellers. What we can expect is a tangible reduction in alcohol fuelled violence in Alice Springs in the immediate future.” 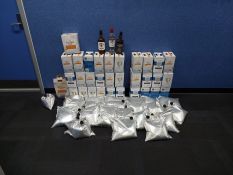