Nhulunbuy Police are calling for information to assist in investigating a number of recent unlawful entries in the town and nearby communities.

Acting Superintendent Michael Milde said, “On Monday night unknown offenders entered a business in John Flynn Drive and stole a quantity of cash and other items, as well as causing damage to the property.

“Another two organisations in Yirrkala were entered the same night, where unknown offenders stole cash, a mobile phone and a vehicle from one whilst at the other a safe was stolen (recovered a short distance away) and a fire extinguisher let off causing damage inside the premises.

“Also, a Yirrkala resident returned from a visit to the homelands to find her house and been entered and contents rummaged. Nothing appears to have been stolen in this incident.”

These incidents follow several more reports of trespass and unlawful entry this month.

“These incidents are very disappointing and a poor indictment on the community. It is especially sad that the places entered and damaged last night are community assets which provide support, jobs and education to the community they serve. We are appealing to the public, if anyone has information about these or other property offences in the region to please contact police on 131 444 or come in to the Nhulunbuy Police Station.” 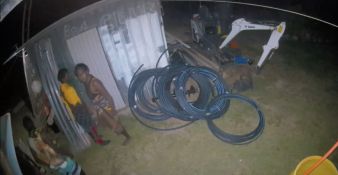