Two people have been arrested and charged with drug related offences after police seized more than $28, 000 worth of cannabis from a home in Tennant Creek overnight.

Tennant Creek Police conducted a search on a property where it is alleged they located 564 grams of cannabis with a street value of $28, 200, which was destined to be sold to remote communities across the Barkly region.

A 20-year-old man who was at the property and found in possession of cannabis was issued a Drug Infringement Notice for Possess Schedule 2 Dangerous Drug.

“This is a great result in reducing drug related harm to people living in remote communities in the Northern Territory and we will continue to focus on holding these offenders responsible,” said Sgt Hutchinson-Goncz 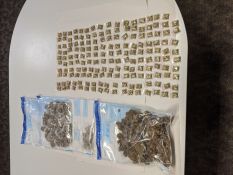