Congratulations to Constable 1st Class Jacqueline Nicholson, who has been named as this year’s Rotary Club of Darwin NT Police Officer of the Year.

Constable Nicholson is the 29th NT Police Officer of the Year. She receives her award this evening from Her Honour the Honourable Vicki O’Halloran AO, Administrator of the Northern Territory, at a small ceremony in the gardens of Government House.

Constable Nicholson joined the NT Police twice – in 2009 and then again in 2018 after spending a few years interstate. She is currently working as a Hospital Based Constable at Royal Darwin Hospital.

President of the Rotary Club of Darwin Paul Simon said, “There were many quality individual nominations this year specifically for Constable 1st Class Jacqueline Nicholson, for Police Officer of the Year and this is because she has made such a strong impact with those with whom she works most closely – the community attending Royal Darwin Hospital.

“Constable 1st Class Nicholson provides a contact between Department of Health and the Northern Territory Police Force. In performing this role of assisting investigations for both remote and local Police where the offender or victim are inpatients at Royal Darwin Hospital.”

Top End Health Service Chief Operating Officer Michelle McKay offered her congratulations as well. “What a wonderful achievement, and we are very pleased to see Jacqui recognised for the extremely important work she does. Jacqui is a tireless worker and her passion shines through which is evident in her being awarded this honour.”

Constable Nicholson said she was humbled by the award.

“I joined the police force because I wanted to help people,” she said. “As a hospital based constable, I have the privilege of helping people at what is sometimes the lowest point of the lives, whether they are victims or offenders. It’s challenging and confronting, but also very rewarding. I get to meet people from all different walks of life at the hospital and as the police representative at the hospital, I always work to portray a positive, caring image of the police force.

“I couldn’t do this job without the support of my family and co-workers, and I’d like to take this opportunity to thank you for that.” 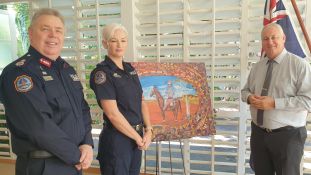