Northern Territory Police have released an image of a group of youths they wish to speak to, after receiving multiple reports of car windows being smashed across Alice Springs in the past two days.

More than 30 parked vehicles have been damaged by unknown offenders in Alice Springs in the past two days.

“Police have released images of people we’d like to speak to following reports of a number of vehicles being damaged in a shopping centre carpark.

“We will continue to review CCTV footage today to identify the persons involved in the multiple incidents which have been reported to police,” said A/Supt Engels.

We are reviewing CCTV footage from across the areas which were targeted, and continue to encourage anyone with dash cam footage or information which would assist in identifying these offenders, to report it to police via 131 444 or anonymously via Crime Stoppers on 1800 333 000. 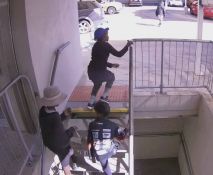