Northern Territory Police are calling for witnesses to a recent dangerous driving incident to come forward.

Yesterday, police arrested a 19-year-old male in relation to the incident but there may be further witnesses yet to be identified.

Around 12:30am on 15 January, the alleged offender drove a silver Holden Astra into the carpark of a fast food restaurant and deliberately drove into another car at speed; that car was then pushed into another vehicle in the car park.

Detective Senior Sergeant Brett Cottier said, “There were multiple people in and around the two impacted cars. Luckily nobody suffered serious injuries.

“The offender identified himself by shouting his own name as he left the property, and after evading police he subsequently handed himself in. This young man’s behaviour was reckless and unacceptable. Police will not tolerate lives being put in danger like this.

“We are aware that there were other people in the vicinity at the time and possibly there were further victims, and we are calling now on those people to come forward and make a statement. We are also asking the driver of a white SUV that was in the carpark at the time of the incident to contact us.”

Detectives from Serious Crime have charged the 19-year-old with:

He was bailed to appear in Darwin Local Court on 1 February 2022.

Anyone with information is urged to contact Police on 131444 and quote reference number 9901363. 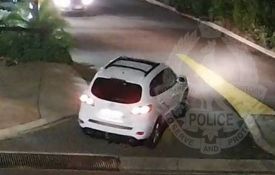