NT Firefighters of the Year

Congratulations to the Northern Territory’s 2021 Firefighters of the Year.

The Rotary Club of Darwin North runs this award to recognise the commitment, bravery, professionalism and community service of both the career and volunteer firefighters.

Chief Fire Officer Mark Spain said, “Leading Firefighter Branson and AFF Captain Jones embody all the qualities that make a great firefighter. Both men are dedicated to the communities they serve, to training and improvement and we couldn’t be prouder of them today receiving these awards.”

LFF Branson has served with NT Fire and Rescue service for almost 20 years, and was a firefighter in South Australian before his move to the Territory. He has been very active in the areas of road crash rescue training and research. He is dedicated to delivering training and support to auxiliary and volunteer firefighters, and also undertakes school visits to talk about fire safety and career options.

AFF Captain Peter Jones has been an auxiliary firefighter for 10 years and Captain at Yulara since 2016. He is also passionate about training and encouraging new volunteers, and is often at the head of community fundraising activities. Peter is something of a mentor to new and upcoming firefighters and is always happy to share his knowledge or just lend a shoulder if that’s what’s needed.

Recipients receive the Eric Simmons Medal named in honour of Past President, the late Eric Simmons, who was a director of the NT Emergency Services and a member of the Rotary Club of Darwin North. In addition to the medals, the Rotary Club of Darwin North donates $1000 on behalf of each recipient to Australian Rotary Health for ongoing research into Post Traumatic Stress Disorder as it affects emergency services personnel.

Northern Territory Fire and Rescue Services thanks the Rotary Club of Darwin North for their continued support.

AFF Captain Peter Jones will receive his award at a private presentation at Government House this evening, presented by Her Honour the Honourable Vicki O’Halloran AO, Administrator of the Northern Territory.

LFF Branson was unable to travel to Darwin for the event due to the current lockdown in Katherine. 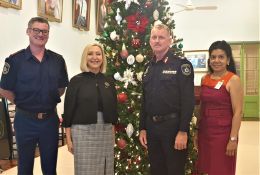