At around 6:40pm the Joint Emergency Service Communications Centre received reports that a 31-year-old male and 12-year-old boy were stuck on a sandbar adjacent to Sunset Park.

The Water Police, with assistance from the NT Emergency Service, launched a rescue operation and conveyed the pair to shore via jet skis. The stranded pair were back on shore being assessed by St John Ambulance by 8:00pm, nil injuries were reported.

Acting Sergeant Sean Stanley said, “The incoming tides here in the Top End can move incredibly quickly, this incident serves as a timely reminder to check tide times and always be aware around our waterways. I would like to commend the members of the Water Police for safely conveying the pair back to shore and for the assistance provided by other agencies. This was a fantastic result.” 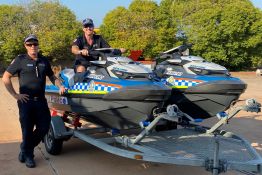