Tomorrow marks International Firefighters Day, a day we reflect on past firefighters who have given their life to serve and protect the community, and to those who dedicate their lives to protecting us all. On that note, we’re showcasing one of long term firefighters who, after three decades in the job, still thinks it’s the best job in the world.

In 1986 Leigh Swift made the decision to join the Northern Territory Fire and Rescue Service. More than three decades later and several different fire stations, Swifty now reigns the fourth oldest fire fighter in the NTFRS and shares his insights into why firefighting is ‘the best job in the world’.

“It’s not highlights as such, but fulfilment by being able to help the public in difficult situation,” said Swifty

“Like saving the occupants or their pets in a house fire or containing the fire from spreading to different rooms in the house to protect belongings and property.

“Talking to persons who are involved in a motor vehicle accidents and reassuring them whilst extracting them from the vehicle.

“Being proud of who you are and who you’re representing when in the public’s eye. Interaction with the children when in public or on station visits is something we all get a buzz from and is an enjoyable part of being a fire-fighter.”

But before he donned the yellow turn out gear or the suave navy uniform, Swifty and fellow squad mates left the NT to undertake four months of fire fighter training with their WA counterparts.

“We went to Perth for 16 weeks and trained with WA recruits in the middle of winter through the rain and the cold,” said Swift

“It was difficult being away from a pregnant wife and 18 month old child and being in a new environment with six other recruits with a supervising officer from the NT who became your new family.”

“I did not know what I was getting myself into but quickly learnt you listened to what was being said and followed it to the order.”

Training to be a fire fighter was nothing like current training. “There’s a lot more safety measures put in place nowadays.”

“Training was repetitive, in order and without question to obtain an end purpose, to ensure we understood what was required to become fire-fighters. Training was difficult but very rewarding once completed.”

“Crawling around with breathing apparatus on in a smoke filled environment, driving 16 tonne appliances on skid pans and through city streets, running down 120 foot high silos on a line face first doing carabiner run throughs was not something you thought was the norm but was part of the training we did.”

The training would serve him well, equipping Swift with knowledge and skills which would be used across the various fire stations he would inevitable work in.

“All stations have their peculiarities, from the top end rain seasons to the hot summers in the south the region you are living inn does have an influence as what occurs when fire-fighting.”

“ I enjoyed the track stations life, and my nine plus years that I had in Tennant Creek,” said Swift

“The auxiliaries/volunteers who you were working with did not have the training like the members on the main stations who had been through a recruit course. So you become a leader/teacher/father figure to mould these members during training for 2 1/2 hours one night a week or over several weekends throughout the year with training to meet competency requirements they need to become a fire-fighter.

“Track stations work is completely different in that at any fire call you were about to attend you did not always know who was going to turn up due to the auxiliaries and volunteers work commitments that day. One day you might attend a house fire with one member and other days you would have a full complement to help out. Distances to motor vehicle accidents and resourcing crew was often challenging and something you needed to be mindful of, what appliances went and stayed, what manning was needed to attend and who were required to remain in town to protect the ERA.

“You are the face of the fire service when on a track station and although you have down time you are always available when required.

“Part of track station life was getting involved with the community and their local events and being a member of various clubs and being able to be giving back to the community, which was very rewarding.”

“Working on the main stations like Alice Springs is different in that the members have all been through a recruit course, the majority of the members have a wealth of experience behind them and are very capable to perform any task asked of them as a fire-fighter. The banter and comradery between members from different shifts is always strong and enthusiastic. Recall and backup crews were generally available to assist with other incidents if and when required. Shift work is the norm and is widely accepted as helping with family life.  Member numbers have risen significantly from when I started at the Bath Street station, the equipment used today has evolved dramatically during my time and so have the type and number of appliances that are able to be called on when needed in the Southern area.”

An apprentice and qualified in the building trade prior to becoming a fire-fighter, Swift continued and kept up his skills within the industry for the past 30 odd years, further equipping him in having the skills for his current position as the Station Officer Built Environment and Compliance in the Fire Safety Command.

“It is something that I always thought I would enjoy doing when the time came to get off the trucks. Understanding what buildings require through legislation and how systems and equipment are installed under the Australian Standards is an integral part of this position. Meeting with the public and assisting owner/occupiers/public to have a compliant building in regards to fire safety is the most satisfying part of working in this position.”

“My advice would be to get some life experiences behind you and work for a few years after school, join a volunteer group (fire, St John, emergency services) give some time and understand in a small way what structure is, giving to the community is all about and this positively will enforce the understanding of what becoming a fire-fighter is about.” 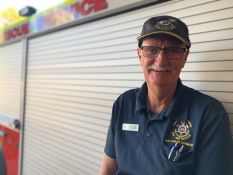