Northern Territory Police hold concerns for the welfare of a Queensland man who has been reported as missing in the Barkly area since late last month.

Adrian De Jong, 50 was last seen as he checked out of a caravan park in Tennant Creek around 10am on Monday 22 March and advised staff he was driving to Ti Tree for work.

Local police were alerted the following day that Mr De Jong did not arrive in Ti Tree and immediately begun making inquiries with Queensland police and nearby remote communities, to locate him. To-date efforts to locate Mr De Jong have been unsuccessful and police now seek public assistance.

Adrian De Jong is described as being of Caucasian in appearance, 176cms tall, solid build with blue eyes, grey hair and a long grey beard and moustache.

The ute has a steel tray with two tool boxes on the back covered in blue tarpaulin and is believed to be towing a box trailer with Queensland registration DK3346, which contains a 1989 Harley Davidson Heritage softail motorcycle QLD rego YE830 and two rough dirt bikes.

"Police hold concerns for Mr De Jong as it is understood he has an underlying medical condition which requires ongoing medication." said Senior Sergeant Crispin Gargan. 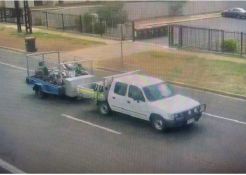