Call for information – Person of interest

Northern Territory Police are calling for information on the whereabouts of Troyston Allen.

Police would like to speak with Mr Allen regarding a number of incidents in the Darwin area during the last month.

It is believed he has left Darwin and may in the Ngukurr, Numbulwar or Arnhem Land regions.

Mr Allen is described as an Aboriginal man of athletic build, 185cm tall with short curly hair. He is 22 years old. 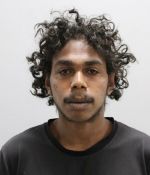