Northern Territory Police have seized a vehicle under anti-hooning legislation in Katherine.

At about 9:45pm on Wednesday 20 May, a Toyota Landcruiser utility was approaching a random breath testing station on the Stuart Highway, Katherine. The driver conducted a sharp U-turn and executed a burnout before speeding away. Police pursed the vehicle which allegedly travelled at speeds up to 160km/hr before the pursuit was terminated.

Police located the abandoned vehicle in bushland a short time later after the driver and his female passenger fled on foot. A search of the vehicle located a less than traffickable quantity of cannabis.

The vehicle was seized for 48 hours under anti-hooning legislation.

The 34-year-old male driver was issued a traffic infringement notice for: 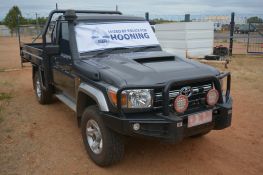