Northern Territory Police are calling for information in relation to an alleged robbery that occurred on 27 October 2020.

Around 8:30pm, a male approached a man and a woman on Parap Road, stating he was being chased and needed assistance.

The couple agreed to take the man to the local police station, during which time he begun threatening the driver with an edged weapon.

The vehicle stopped at nearby shops before all occupants exited the vehicle and the man has fled the scene.

Police would like in particular to speak with the man who was seen in the area who may be able to assist police with enquiries to the incident.

The man is described as being Caucasian, approximately 30-35 years old, bald, medium build and approximately 180cms tall. He was wearing a black t-shirt with a large white print on the front, black shorts and carrying a small black bag at the time. 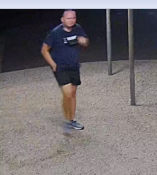