How fit do you have to be to join the Northern Territory Police?

Superintendent Neil Hayes and Senior Constable Erin Paterson are travelling the Territory in search of our future front line and support officer roles including Aboriginal Liaison Officer and Auxiliary, for the NT Police.

The pair kicked off their two week recruitment drive with a visit to Katherine to catch up with the locals, check in with stakeholders and host the first of three fitness assessments held throughout the recruitment roadshow.

“We’re hoping to generate some interest as many of the positions we are recruiting for are outside of Darwin,” said Supt Hayes “Our meet and greets are all about providing an opportunity to locals in these locations to speak with us and try the fitness testing.”

Seven people attended the first fitness assessment and were put through the rigorous, fast paced training, testing their endurance, strength and agility in the early but sweaty hours of a Saturday morning in Katherine.

“They did well, but there is room for improvement in the endurance test,” said Supt Hayes.

Next stop – Alice Springs and a fun challenge for the producer of the ABC Radio Breakfast show Justin Fenwick aka the smiling assassin, who may just require a license for those biceps.

Following the fast paced series of push ups, sit ups, plank and grip test, it was onto the dreaded beep test. Justin smashed out big numbers in the earlier tests, but it was Supt Hayes who managed to breeze past Justin getting up to level 9 of the beep test.

In the end it was draw, but we’re stoked that Justin was willing to try it out and are hoping you are willing to too.

The delightful duo will be making their way up to Tennant Creek to talk all things recruitment tomorrow and are holding a fitness assessment at the Tennant Creek Basketball Court at 8:30am on Saturday 17 October. But if you missed them make sure you attend the Fitness Assessment which will be held in Alice Springs at the Centralian Middle School basketball court on Sunday 18 October from 8:45am for a 9am start. 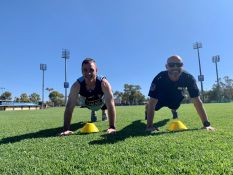 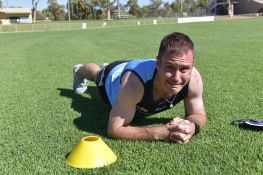 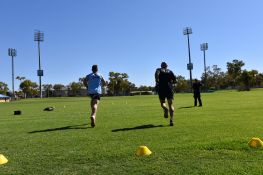