Two male youths, aged 13 and 14, were caught riding their motorcycles on a sports ground at around 9pm on Thursday night. The pair were seen doing burnouts and causing damage to the grass of the oval.

Police attended and seized the bikes for anti-hooning offences.

Superintendent Daniel Shean said, “These motorcycles have been observed by a number of Katherine residents causing a nuisance in the community and at times a danger to the public whilst out walking.

“Police had no hesitation in seizing the bikes to prevent repetition of the offences. Hopefully, having the bikes seized and having to pay towing and release fees might make them think twice about doing the same thing again.” 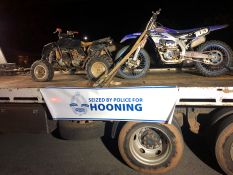