Last night, police received information that a Toyota Hilux travelling along a back road was transporting a large quantity of alcohol.

Upon apprehending the vehicle, police observed the driver run off into the nearby bush. Enquiries into his identity are continuing.

The remaining eight passengers, three of whom were riding in the tray of the Hilux, were issued with infringement notices.

A search of the vehicle located:

The alcohol was seized and destroyed.

Superintendent Kirk Pennuto said police will continue to target illegal activities, which can cause significant harm and impact our communities.

“Those attempting to transport liquor, can expect police to intercept, in an effort to keep our vulnerable communities safe.”

For information on liquor restricted areas in the Northern Territory, go to https://nt.gov.au/law/alcohol/bans-and-dry-areas/where-you-cant-drink-in-the-NT/list-of-restricted-areas.

Anyone with information on the supply of illicit substances to the communities is urged to contact police on 131 444 or Crime Stoppers on 1800 333 000. 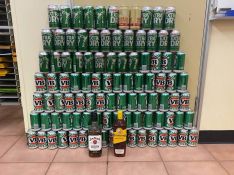