Around 2:30am today, a 38-year-old man allegedly failed to comply with directions of police to stop at the Western Australia Border Control Point. The man travelled through the 40km/h zone at 72km/h. He was stopped shortly after and police requested he complete the NT Border Entry Form. The man refused and drove away from police.

Around 7:30am, police from Northern Traffic Operations deployed tyre deflation devices on the vehicle approximately 20km west of Katherine on the Victoria Highway. The driver was arrested and conveyed to the Katherine Police Station.

He is expected to be charged with:

The driver also has a warrant for not appearing in Darwin Local Court on 24 May 2016.

Information for persons travelling from interstate into the Northern Territory can be found at https://coronavirus.nt.gov.au/travel/interstate-arrivals. NT Police advise all travellers to visit the internet site to ensure they comply with the border controls.

Superintendent Daniel Shean said, “Border controls are in place to protect Northern Territory residents from coronavirus. Everyone must comply with the border controls. The actions of this person this morning were dangerous to our police officers whom have been posted to the borders to help protect the Northern Territory from the coronavirus. These sorts of actions will not be tolerated and those that do not comply will either be fined or, as per this case, be presented to the court.” 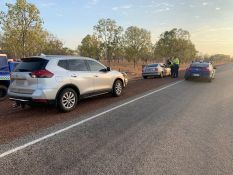 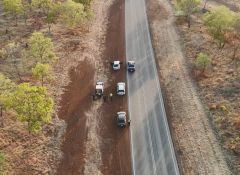