At around 5:00pm, police detected a 26-year-old woman driving an uninsured and unregistered vehicle with an expired licence. She was issued with a traffic infringement notice. In a separate vehicle, a 20-year-old man was detected driving unlicensed with an unrestrained child in an unregistered and uninsured motor vehicle. He was issued a notice to appear in court at a later date.

At 8:00pm, police apprehended a vehicle with five occupants near Liverpool River crossing. Police conducted a search and located two bottles of liquor and a large quantity of yeast, suspected to be for home brewing. The liquor and yeast was seized. Four of the vehicle occupants will be issued a notice to appear in court.

Fifteen minutes later, a second vehicle with two occupants was apprehended. Two bottles of liquor were seized from the vehicle and both occupants will be issued a notice to appear in court. The 23-year-old male driver was found to be driving disqualified.

At 8.30pm, a vehicle failed to stop for a traffic apprehension 2km south of the Liverpool River crossing. The vehicle was located a short time later with mechanical issues. The 26-year-old male driver tested positive for alcohol and returned a result of 0.086 BrAC. He was found to be driving medium range blood alcohol content, driving an unregistered and uninsured vehicle whilst unlicensed. A search of the vehicle located three bottles of liquor. The driver was issued with a notice to appear in court at a later date and the further four passengers will be issued a notice to appear in court.

Around 9:50pm, police came across a single vehicle crash on Maningrida Access Road 1.5km from Maningrida community. Two occupants had already self-extracted from the vehicle. The 41-year-old male driver was arrested for the purpose of breath analysis and he returned a result of 0.147 BrAC. He was issued with a notice to appear in court for drive without due care and drive medium range blood alcohol content. He was treated by local clinic staff for minor abrasions.

Throughout the evening, approximately eight litres of liquor was seized from a number of vehicles.

Superintendent Brendan Muldoon said, “The behaviour of these individuals in unacceptable, particularly those who put others at risk by drink driving and driving with children unrestrained. We will continue to disrupt those who intend to bring harmful substances into our communities.” 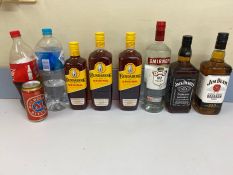