Northern Territory Police are calling for witnesses in relation to an alleged stealing which occurred in Palmerston CBD on Monday 9 September, 2019.

At about 12:20pm, an 86-year-old man, who is a wheelchair bound double amputee, was waiting at the pedestrian crossing near Puma Service Station on Temple Terrace. The man was approached by a female, of Aboriginal appearance, who attempted to take his bag, the strap of which was around his neck.

The female approached the man a second time successfully stealing the bag which contained personal items and a Personal Safety Tracker which was secured around his neck.

She then returned to a nearby group of women, of Aboriginal appearance, before departing the area together.

Police are seeking to identify the female who is described as between 20-30 years old with a slim build, dark skin tone and black hair with a blonde streak across the front. She was wearing a pink singlet, dark shorts and light coloured thongs. 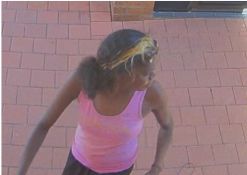