Northern Territory Police have arrested a 32-year-old male in relation to alcohol and traffic offences which occurred on Thursday 31 October, 2019.

Police were conducting Traffic Operations along Daly River Road when the male was apprehended and subjected to a road side breath test. A positive result, over the prescribed legal limit, was returned. It was subsequently discovered the male is disqualified from driving.

A large amount of alcohol was also located in the vehicle. It is believed this alcohol was being transported to Wadeye Community where a single bottle of rum has a street value of $600.

The male has been charged with:

He was remanded in custody and will appear in court at a later date.

Anyone with information on the supply and / or possession of alcohol in an Alcohol Protected Area can notify police on 131 444 or anonymously via Crime Stoppers on 1800 333 000. 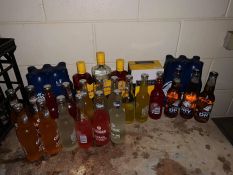